It is mid afternoon and I just woke up from a nap. Sheila is still snoozing even though we woke up late. We thought about having breakfast, but then realized it was too close to lunch time. Our favorite seafood restaurant, Il Loco Frutti de Mar, was our choice. Sheila had spaghetti with fried artichoke and sardines while my choice was octopus with potato salad. We shared a carafe of very dry white wine.

Can’t find a lunch like that many places in the US.

It was sunny and mild as we ate our lunch al fresco, but it has clouded up a bit. The temperature is about 65. It is possible that we might have a thundershower a bit later.

The trees outside our window had buds when we arrived a week ago, but now they’ve started to leaf out. There are a few gulls floating above, a crow or two caw from a branch and a green parrot shrieks as it flits by in an emerald flash. Parrots started showing up in Rome around 1970. Who knew?

There is a Catholic Church across the street, one of more than 900 in this city, but it is a relatively new building erected in the sixties of the last century. The place does quite a lot of business with people going in and out at all times of the day. At the end of each mass three bells toll, a peeling that is chaotic but wonderfully dramatic. Sometimes only one bell rings. I don’t know what that means. Maybe the priest just rings it for the hell of it.

We were here for all the holidays of Easter which include Maunday Thursday, Good Friday, whatever Saturday is called, Easter Sunday and Monday, a secular holiday. The bells really had a good workout over the weekend.

We rather like the Roman style of sleeping late and then staying up late. Well, maybe not that late 10:30 or 11:00. We also like drinking a lot of wine and wonder why good Italian wine is so expensive in the US. Maybe it’s just as well.

We end each evening with gelato. Sheila has hers on a cone and mine is in a dish. We try a different flavor every time we visit the Millennium, our gelato shop only two doors away. Our host says it is one of the best in the city. I like pistachio or black cherry, and Sheila hasn’t made up her mind yet as there are so many yet to try. She admits to liking creme caramel.

The Roman pizza we’ve tried has a thick crust, but not like the soggy, deep dish kind that is labeled “Chicago” style. The crust we had was raised and crispy. We had sausage and cheese, cheese and spinach, octopus with marinara sauce and the delightful server gave us, as a bonus, meatball and cheese. Of course we had a bottle of red wine with it. We took over half of it back to our flat for another time.

It was necessary for us to get up early a couple of days to go on tours. We got out of bed at six in the morning for Christ sake. However, if we didn’t get there early we’d possibly have to be in line for four hours.

No, that isn’t true. We would never stand in a line that long for anything. Well, maybe Natalie McMaster.

Anyway, when we do get up early enough, we like to get our tiny cups of coffee with a pastry. I order an Americano and Sheila gets a Cappuccino. We find that the small volumes are so strong and tasty that we don’t need the large servings we drink at home. Plus, the pastries are outlandishly good.

We do other things than eat, drink and sleep, but those will go in another piece. 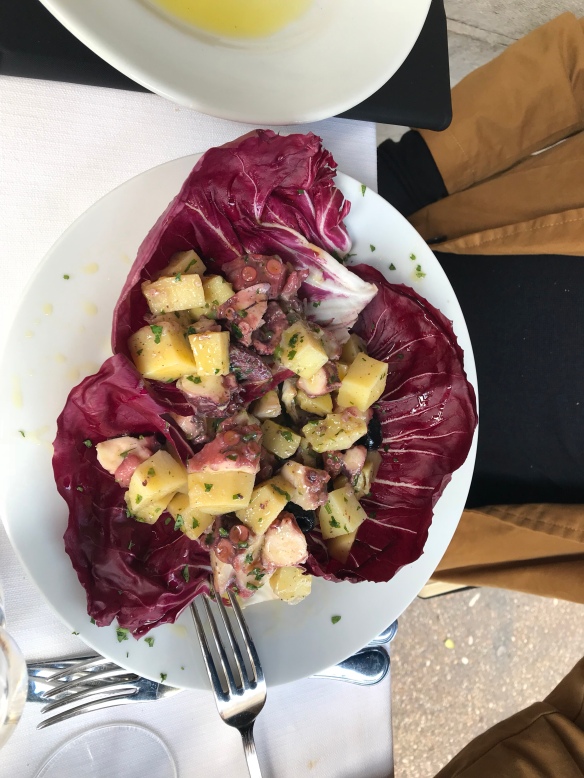 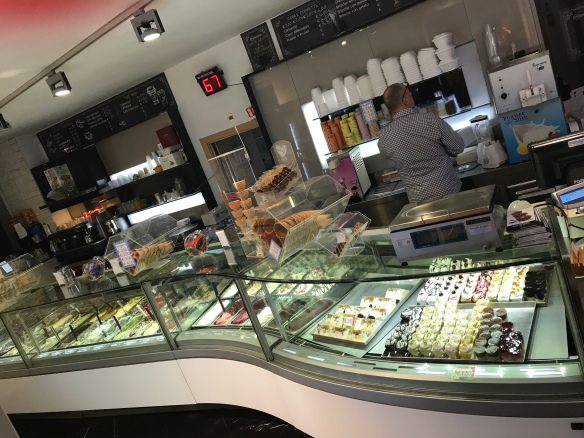 2 thoughts on “Lazy Days in Rome”