While our First Class seats to DC were nice, wide and plenty of leg room, it was the service that make the difference. No boxed food with plastic forks, knives or spoons. Our breakfast was served on plates without foil or wrap on my Spanish omelette or Sheila’s fancy oatmeal. Earphones were free.

But, the flight from Washington, DC to Rome was so great that Sheila thought she would be satisfied if we just turned around and went back on the same day. Our seats were more like little apartments and could be reclined fully. We had extra blankets, a fluffy pillow and little socks we could wear while sleeping.

We got seats right at the front of the plane and were immediately served champagne in crystal flutes.

After takeoff refreshments were offered, and I asked what my options were. “Anything you want,” answered Holly, our attendant. I chose a shot of Buffalo Trace bourbon with an IPA. Quite nice. Sheila tried a flight of three red wines and let me have a sip of each.

When lunch was served, our trays were first covered with a table cloth while we refreshed our hands and faces with a hot cloth. What would we like to drink with our meal, we were asked.

I found one of Sheila’s reds very good, so I ordered a glass to accompany my pork chop.

When the attendant asked if I wanted a refill, I assented. She came back twice more with wine before I refused. Then I reclined my seat fully, covered up and went to sleep.

For about twenty minutes.

Sheila had not slept at all, and we were both exhausted when we landed at the airport close to Rome. Even though the terminal was simpler than most international airports, it was difficult for us to find our way around, so we ended up just following the the rest of the passengers. At first it seemed as if there were hardly any other people around, but after we got off the shuttle train we found that all flights seem to lead to Rome. In our fatigued state it seemed as though there were a thousand people queued up to go through two customs gates.

Unlike other airports, once we got our passports stamped, there seemed to be only a few commercial offerings. We even failed to find a place to sit down and have coffee while gathering our wits. After wandering around in a daze for ten minutes, we found a soldier carrying impressive weapons who told us where we could find an ATM. With a minimum of argument and fumbling around with the machine, we eventually extracted 400 euros.

There were a number of options for transportation to Rome (a matter of twenty miles or so from the airport). Choices were not something our tired minds wanted to handle, especially when so many people were clambering for our attention.

We’d planned to take the train as described by several travel guides, and it seems that most people go into Rome this way. But reading about it at home, where the process seemed simple, and actually doing it was quite different. Getting tickets for the train, getting bus tickets, switching buses, and finding our rental seemed quite daunting. But we were saved by a tall, middle-aged man with a shaved head who looked like a well dressed criminal.

He pointed out that he needed two more passengers for his van and for just a bit more than taking a shuttle, he would deliver us right to the Vatican area close to our lodging. The four other passengers waiting outside the terminal were young Spanish men from Pamplona, so we figured that we probably wouldn’t be kidnapped and held for ransom, not that anybody would help us in that event.

The landscape on the way from the airport was as flat as Iowa and, like the Corn State, almost totally agricultural. It was fully spring and the fields were various tints and shades of green. The differences from the American Midwest were mainly the irregularity in the shapes of the fields and the buildings of the farms and villages were obviously Italian with stucco walls and red, tile roofs. All the side roads were curvy instead of straight with right angle intersections.

As we approached, Roman hills sprang up around the freeway and small wooded areas with the famous Italian Umbrella Pines and Eucalyptus trees appeared. Off the main highway the lesser arterial became narrow and less maintained. Further into the city the roads became congested with traffic, mostly small cars, motorcycles and scooters, very few SUVs and no pickups. In spite of the large number of vehicles, there were hardly any horns, and drivers seemed quite careful. Scooters and motorbikes weaved in and out of traffic, but the operators of the cars and trucks seemed to be aware of them and gave way.

In spite of our fatigue, we were excited about seeing the ancient city. Rome has that worn-down look of old neighborhoods, and the dumpsters were overflowing with trash and recyclables. Nevertheless, the city looked vital as residents, young and old, various stages of fashion stepped quickly or sauntered along the sidewalks. One of the differences from the US and most European cities that we immediately spotted was the number of smokers. Even though we later noted that the cigarette packages illustrated the grisly effects of smoking, it seemed that many Romans remain loyal to the noxious weed.

We knew that our apartment was somewhere near the walls of the Vatican, but we also knew that we would have to get out the GPS app on a phone once we were let off. We would have to drag our luggage for who knew how many block to get to our digs. So, we were delighted when our mafioso driver let us off directly in front of our address.

The large double door looked formidable with spikes along the bottom that stuck out so that midgets could not barge their way in. And when our landlord opened up, a marble staircase rose to a small, old fashioned elevator that had manual doors. When the car reached our floor, I stumbled out, tripping where the elevator did not quite reach the level of the floor.

Our host went to pains showing us the apartment with a living/dining area, a hall leading past a kitchen and a bathroom to a large bedroom. Off the bedroom is another bathroom. One bathroom has a bidet that I haven’t figured out yet. The controls look complicated and even dangerous.

The other bathroom has a hose with a shower head next to the toilet, and appears to be useful only if one wants to give his whole butt a rinse. I’ve been afraid to use this one also.

The owner went on and on, explaining the light switches, the washer, the drying rack, the gas stov, the television and other things that I finally tuned out. We looked at each other and rolled our blood shot eyes. He kept saying, “Ok, I won’t keep you.” And then he’d think of some other trivial matter. 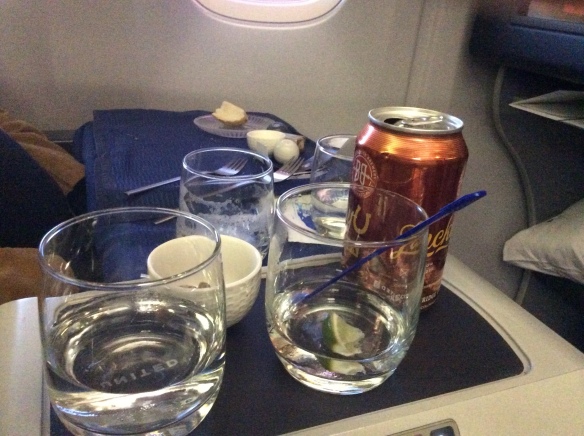