Apologies: We interrupt the Alaska saga to present another, more current adventure.

Being retired and used to getting up whenever I feel like it, actually whenever my bladder feels like it, I’m uncomfortable with setting an alarm and relying on such a device to awaken me. Also, the idea of getting out of bed at time that is not of my own choice is repulsive to me. Especially when I’m expected to rise at the insane hour of four in the morning.

I took an antihistamine at nine o’clock in the evening, something usually puts me to sleep soundly for most of the night. I went to sleep but woke half an hour later and looked at the clock. So it was for the rest of the night, waking up every fifteen minutes, or so and looking at the clock, not trusting the alarm. When the loud buzzing at four o’clock did wake me, I was in a sound sleep and not happy. Nevertheless, I bounded out of my covers as if there were a fire in the bedroom.

At four thirty, Christian, our Uber driver, arrived in his Hummer, covered with his original bright designs, and with his dog, Tilly. We soon learned all about how Tilly got her name (quite complicated, something about the dog’s parents’ names and how he obtained her, and that she is his service dog), and how he was sick in a hospital for over three months with an unusual type of pneumonia that required him to be in isolation (Tilly was brought in to see him several times a week). He told us that he was thirty-five and that he was a junior at the university on full scholarship. And that he was going to med school, and . . .

He talked all the way to the airport. Nice guy, interesting stories, but my ears rang for hours after he dropped us off. 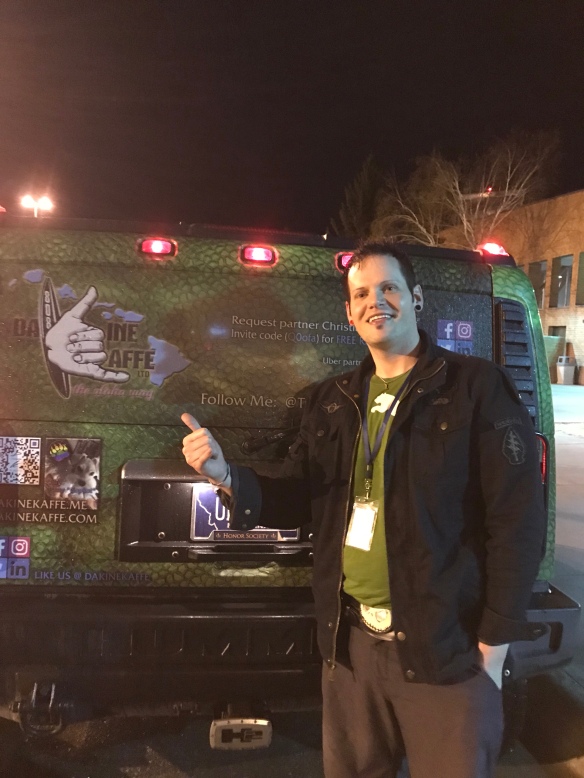 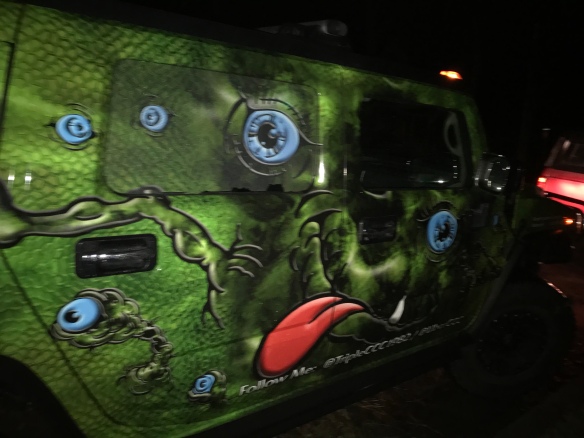 Sheila said that she’d not slept well, so we were both groggy while we waited to board our plane to Seattle. Plus, I had the additional antihistamine hangover that left me in a daze of incomprehension. We both avoided coffee as we might be able to sleep on the one-and-a-half hour hop to Seattle.

Of course, neither of us slept. We were both concerned about missing the next flight as there would be a very short layover of one hour, and it looked like a long walk from our landing gate to the next. And, we still were in some doubt whether we were really going to be in First Class. Even though Sheila had confirmed the tickets several times, it still seemed too good to be true.

I’d forgotten about the time change between Missoula and Seattle, so by the time we arrived at the gate for the flight to Washington D.C., it looked to me as if we had missed it. However, the time I had on my iPhone was still on Mountain Time. We actually had over an hour to wait.

Now we relaxed a little and allowed ourselves to have a bit of coffee and a snack. I was starting to emerge from my antibiotic fog as we comfortably waited for our boarding time. We watched the other people rush past us or slowly drag tired children toward a connecting flight.

SEATAC is a huge airport and makes Missoula’s terminal look like a coffee shop.

When we showed up at our gate, there were several lines of people ready to board. Even though our electronic boarding passes indicated that we were in the first group to board, we were still reluctant to move to the front of the line. When I shyly showed the gate attendant our boarding passes on my iPad, the machine beeped loudly and did not accept the computer markings. I could feel the sweat form on my forehead as I could hear the restless crowd behind us.

“I cannot find you on the boarding sheet,” said the woman in an East Indian accent. “You will have to speak to my colleague behind the desk,” she said, handing our passports and my iPad to another woman.

Holy shit. It looked like I hadn’t needed to worry about First Class. It seemed that we weren’t even getting out of Seattle. We might be spending a night with our family here and returning to Missoula tomorrow. I knew something like this would happen.

The desk attendant took our electronic credentials and then got busy with her computer while chatting with another woman in some incomprehensible language. Sheila was calm, but I stood there like a dog waiting for someone to throw a ball. I might have even had my tongue hanging out, panting with nervous energy.

Within what seemed an hour but was only a few minutes, the agent printed out a couple of paper tickets, and we were allowed to board. Within five more minutes, we settled into First Class seats. In fact they were the very last seats in the front of the plane.