It was late August, and, even though the temperature in Fairbanks had been in the nineties it was rainy and chilly when we landed in Fort Yukon. We’d not been impressed as the plane came in on its final approach to the airport and we’d seen the wreckage of several planes dragged to the distant side of the runway. There was no terminal to speak of, just a large hanger with small room on the side. Inside there was a small desk, a few folding chairs and a telephone on the wall.

There was no one in the office area. All the other passengers either had someone waiting to pick them up or they wandered off into the trees, heading into town. Out of nowhere a young woman wearing a red, plaid flannel shirt and faded blue jeans came in and was startled to see us. We explained that our bush pilot was going to pick us up yesterday, but we’d been delayed.

Without any questions, she threw our packs into the back of an old, beat-up green Ford pickup. She told us that Roger was out with other clients and would be back later in the day. She introduced herself as Linda and drove us to Roger’s house.

The next afternoon Roger, who had an uncanny likeness to Jack Nicholson, drove us in the same Ford pickup back to the airport. The pilot had that same crazy grin that his doppelgänger wore in The Shining as he terrorized the Overlook Hotel in Steven King’s thriller novel that was made into a movie.

The plane that we would take to the Brooks Range was a blue and white Cessna with big balloon tires on the landing gears. The oversized tires allowed Roger to land on rough terrain where other aircraft would end up nose down in the ground. He nudged us aside as he was very particular how his plane was packed, and we stood back and watched in silent awe. The big, yellow, inflatable canoe was bulky, even rolled up and took a lot of room. We also had a lot of equipment, and there was barely room for one passenger in back of the pilot’s seat.

Dennis chose to ride in that spot where he guessed that the rolling, up and down motion of the plane might not be so noticeable. After he was stuffed into his seat I pulled myself up into the right side up front. After Roger was satisfied that everything was battened down and snug, including his passengers, he made sure my door was latched firmly and then climbed into his seat.

He was wearing a red bandanna over his head and his eyes were hidden by dark sunglasses. After starting the engine, he adopted the Nicholson persona and gave us the same safety spiel that everyone hears in every commercial aircraft. Then he gave us each earphones and pointed to a sign on the instrument panel. “No Projectile Vomiting Allowed.” 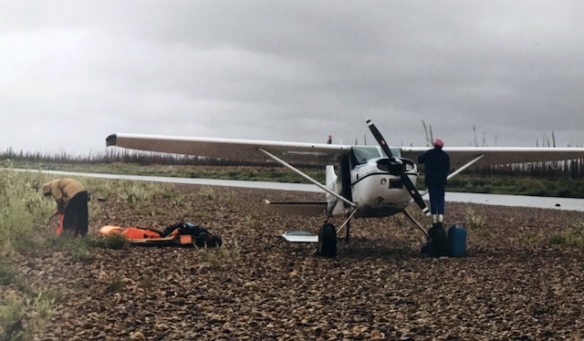 After filing a flight plan and asking the tower for take off instructions, we heard the flight control respond with the barometric reading and wind speed/direction. After taxing to the end of the airport, Roger turned the plane around and pushed the accelerator to the max. Within seconds we were aloft. Dennis groaned.

The sky was spotted with small clouds that made the landscape below a quilt of mostly green with many splotches of spilled ink that had been partly washed out. Hundreds of small ponds reflected the blue sky and white clouds. Lonely spruce stuck up like corkscrews. Dennis later christened them “Dr. Seuss Spruce” for the trees illustrated in the children’s books.

The ride was quite bumpy as many updrafts buffeted the airplane as it flew over the shadows of the clouds. Roger didn’t seem to notice but Dennis whimpered in back as he tried to ignore the sickening movement. He later admitted that he was trying not to shit his pants, not so much because he was frightened, but he felt like he was getting diarrhea from an antibiotic. The jerky movement of the aircraft did nothing to calm his spasmodic intestines.

Roger turned on music to drown out the noise of the engine. Through the earphones we were soothed by the voice of Enya as we flew over the tundra. The enchanting selection was perfect and gave a sense of inspired vision. We saw a moose standing in a pond and later a brown bear was loping through a stand of brush. Neither animal seemed aware of the plane above. We were gods looking down on something even greater than gods.

As we moved north and east, Roger pointed out landmarks along the Yukon River and then the Porcupine River. He pointed out river bends and where tributaries joined the main streams. He particularly wanted us to be able to identify possible landing strips where he could pick us up for the return to Fort Yukon.

Later, it was obvious that nothing looked the same from the river as it did in the air.

At last Roger came to the wide shore that he thought would be a good spot for us to start our float trip down the Porcupine. It was a remarkably smooth landing considering some of the large boulders scattered on the beach. It was about nine-thirty in the evening, and the sun was close to the horizon but would not disappear for another hour. Even this late in the summer there would be only a few of hours of darkness. The sun would rise again at about three in the morning.

While Dennis ran to the bushes, away from the river, Roger began to unload all our crap. Dennis came back and reported that the brush was alive with mosquitoes, but he felt relieved.

It was not the most comfortable feeling to watch the plane take off without us. As the drone of the engine and the speck of white and blue disappeared, the feeling of being alone with no one within hundreds of miles became real.